AZOTEA by-products: Unintended and beautiful secondary results of our project 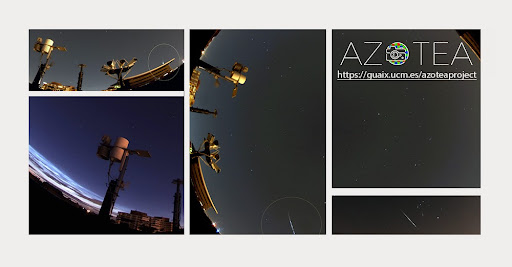 Imagine a movie that includes 50-100 pictures of the sky every single night.  A snapshot of the sky brightness progress. That’s the idea behind the AZOTEA project

The cameras of our collaborators monitor the night sky to serve our main research purpose: to study the light pollution evolution by measuring the brightness and color of the night skies. However, from time to time, we get interesting and interesting by-products.
This is the case of fenomena such as meteoroids entering the Earth’s atmosphere leaving a bright trail technically called meteor and fondly called “shooting stars”

When the meteor detection systems captures one in video we check the AZOTEA database looking for pictures of the event.
Meteoroids are relatively small objects traveling through space, between the size of a grain of dust and a small asteroid.
When a meteoroid is big enough some pieces of it can survive their passage through the atmosphere and lands on the surface becoming meteorites.

Multiple camera views of the meteor’s luminous track allows the trajectory of the meteor through the atmosphere being calculated by triangulation what eventually can lead to find and collect the rocks themselves.

Finally, our cameras have been able to picture noctilucent clouds also called night shining clouds. These made of ice crystals clouds are extremely rare and very high clouds that are visible in the night sky, usually on clear, summer nights during the astronomical twilight.