The pilot is concluded.

Norway is the land of fjords, trolls and – electric cars. By actively promoting the purchase of electric cars, the Norwegian government is aiming at protecting the environment and not least improving air quality, especially in urban areas. Air quality is still a reason for concern in many European countries, including the Nordic countries. Not many people are aware of this fact, and this is where the Norwegian pilot of the ACTION project comes in.

The pilot gave high school students in Oslo and the larger Oslo area the opportunity to design and carry out their own air quality projects, using an off-the-shelf air quality sensor platform. The aim was to create awareness about the sources of air pollution, make the students think of ways to reduce both emission and exposure and teach them scientific working methods. We used the Nova SDS011 sensor for measuring PM2.5 and PM10 that was transmitting data to an Arduino board. The data was obtained through an SD card.

The Norwegian pilot was coordinated by NILU-Norwegian Institute for Air Research. First, we offered a workshop for teachers where they got information about air quality and air pollution sources, measurements and (health) effects. They also got the opportunity to build a sensor themselves and learned how to program it. The teachers were equipped to teach what they had learned to the students. They could also ask for support from NILU scientists.

This activity was a great example for interdisciplinary learning. First, the students were learning about air quality/air pollution and its effects on society (social studies). Then they had to build their sensor packages (technology) and program them (computer science), carried out their own measurements and interpreted the results (science). At the end, all students were invited to join a student conference where they presented their work on a scientific poster.

The first round of activities has been carried out in winter/spring 2019. The second round was carried out between January and April 2020 and a third round concluded its activities in 2021.

Have a look at the ACTION reports and papers in regard to this pilot:

This pilot supported students in learning more not only on air quality, but also on technology and on the scientific method. The latter was achieved by engaging them in all the steps of scientific inquiry from research question definition, to data analysis and interpretation.

You can find a pilot tutorial in Norwegian here and in English here. You can also watch the webinar conducted by the pilot team, together with students, at Ars Electronica 2020. 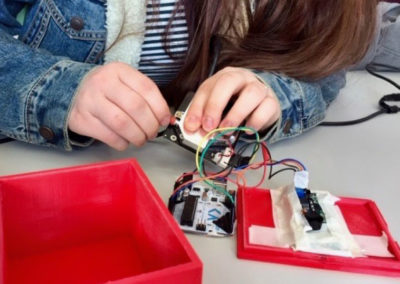